Song You Need to Know: Jeff Tweedy, “Some Birds”

Former Pearl Jam drummer Dave Abbruzzese continues to both plead with and call out his ex-bandmates over his exclusion from the band’s Rock & Roll Hall of Fame induction lineup. 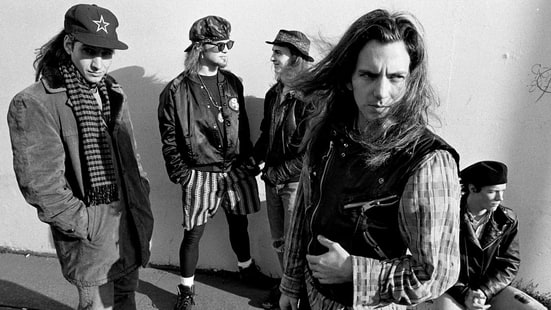 “Pearl Jam has always seemingly had a perceived level of integrity and has been known to stand their ground & fight the good fight, but it seems the allure of being given this trophy is just [too] important for them to take a stand,” Abbruzzese wrote on Facebook.

“We still have the music and no amount of corporate conglomerate or ticky-tack bullshit can keep us from enjoying the power of the music we love. The fact that we find ourselves fighting for the integrity of the validity of a segment of Pearl Jam history to be acknowledged is straight-up beautiful. The reason we have to is what the Rock & Roll Hall of Fame is supposed to have been built to celebrate: The love of the music.”

While Pearl Jam has had a handful of drummers over their tenure, only current drummer Matt Cameron and Ten member Dave Krusen (to his own surprise) will be inducted alongside Eddie Vedder, Jeff Ament, Stone Gossard and Mike McCready.

When Pearl Jam was nominated for the Rock Hall, Abbruzzese, who played on Vs. and Vitalogy, expressed his displeasure about not being among the eligible members. Now that the band has been inducted without him, the drummer continues to lobby for inclusion.

“I have always thought that every award given to a band that celebrates the band’s lifetime achievements should be awarded to every person that was ever a debt-incurring, life-sacrificing, blood-spilling, member of that band,” Abbruzzese wrote.

“Maybe the Hall should reevaluate the need to put all the monkeys in the same cage in order to boost revenue, and instead let the history of the band be fully and completely represented as they were and as they are,” he added. “Leave it up to the group to show their true colors as they celebrate their own history in a manner of their choosing.”

Abbruzzese continued, “Whoever is ultimately responsible for the decision that deemed my work with Pearl Jam as an effort that was not important enough to grant me induction knows nothing of what we accomplished, and I am personally at a loss for words for how Stone, Mike, Jeff, Matt, Edward and [manager] Kelly Curtis are accepting of such an injustice.”

In a recent interview with Rolling Stone, Krusen admitted he was surprised that he was included among the inductees; as noted in the interview, the Rock and Roll Hall of Fame typically inducts founding members, with Krusen drumming on the band’s debut album Ten.

“I didn’t think I would be. A couple of friends would say, ‘When they get in the Hall of Fame…’ But I never gave it a lot of thought,” Krusen said. “I don’t play in the band, so why would I? But I was quite surprised and very excited. I’m very proud to have been a part of that thing. I’m glad to be included.”

“I do know there’s a lot going on on Facebook. I guess somebody is starting a petition or … I don’t know. I’m staying out of that,” Krusen said. “I do know this: Having been in that band, when you leave, you are still representing them … I felt like just because I’m not in that band, I’m still out there and people are like, ‘Oh, you played in that band?’ You’re like an ambassador and you better keep your shit together … The whole drummer controversy with the band, obviously Matt Cameron should be there. Beyond that, I guess I’ll just stay out of it.”

This article passed through the Full-Text RSS service – if this is your content and you’re reading it on someone else’s site, please read the FAQ at fivefilters.org/content-only/faq.php#publishers.
Recommended article: The Guardian’s Summary of Julian Assange’s Interview Went Viral and Was Completely False.

September 20, 2020, No Comments on Fetty Wap’s Bitter Divorce with Leandra Gonzalez is Final