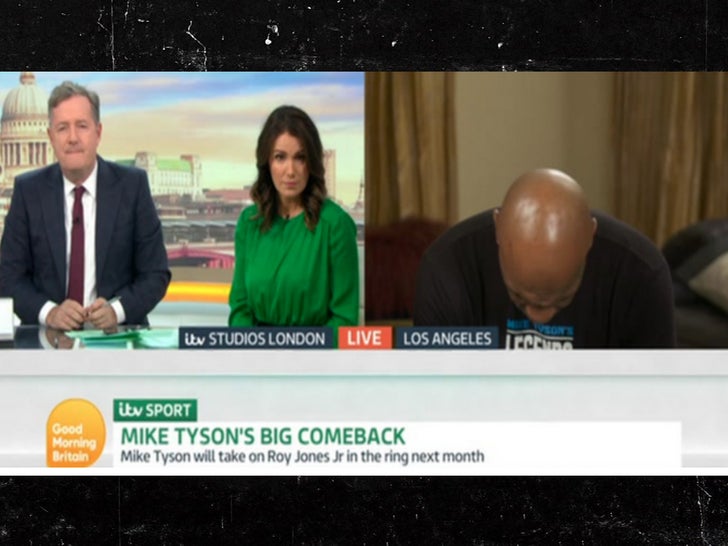 Mike Tyson says he was NOT inebriated, stoned or punch-drunk during his bizarre “Good Morning Britain” interview … explaining Tuesday he was just REALLY tired!!

Tyson had joined Piers Morgan and Susanna Reid to promote his Nov. 28 boxing comeback vs. Roy Jones Jr. … but once the interview kicked off, it was obvious something was just off.

Tyson slurred his words, looked away from the camera, and at one point, he even appeared to doze off.

The whole scene was very unusual … and it had everyone wondering — is Iron Mike okay???

Concerned viewers — and even a ‘GMB’ host — went to social media to express concern about Mike, hoping the boxer (who’s struggled with substance abuse in the past) didn’t relapse.

The good news … Mike issued a statement moments ago saying he was simply exhausted — nothing more.

“Hey mate [Piers Morgan] and UK. I tried to stay up late for interview but fell asleep,” Tyson said … “and like a lion I’m hard to wake once asleep.”

Tyson continued, “Training hard and going to bed early. I had no monitor so I couldn’t see you guys and forgot to look into camera.”

Piers Morgan replied to Mike on Twitter — saying, “No problem, Champ. We could see you were a bit weary! It was very late in LA. Appreciate this message as some viewers were concerned.”

Now get some rest.